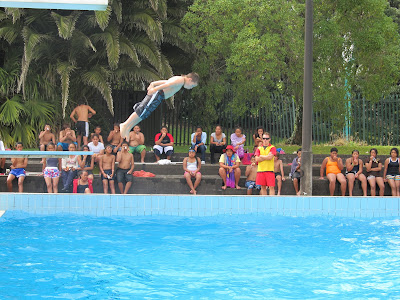 I honestly couldn’t wait for camp as my stomach had butterflies as time was passing. I had just been dropped off to school seeing lots of yr 7 and 8 students with there bags already to go. We all had gathered up in the hall so we can be told where are we going. My group the Carez were told to do Hangi prep. I thought preparing for the Hangi was a great job to do. The Carez had to peel the potatoes and kumara. After a long time of peeling we had been told to get ready for kayaking.

So then the Carez set off down to Pt England beach for kayaking. Mr Burt had set us kids an example of how to place your self in a Kayak. There were also single and double kayaks. I was really looking forward to sharing a double Kayak with one other person. So went off in a kayak trying to pace my self. I imagined I was in a real race passing the finish line coming first. I had very sore arms. It felt like there was something was wrong with my arms. I was getting tired and decided to have a rest on the grass.
We had just finished our practise for the special concert on that night. I was really scared wondering if I will screw up in front of my family and friends. So then minutes went to seconds until the clock was ready to strike 6:30pm. I had a funny feeling in my stomach. “Give it up for the Carez!” said Mrs Lagitupu. Now is the time to shine. Cruz started off our item by saying “are you ready?”, we replied “yes we are”. We marched onto the stage with excitement. After saying our chant 3 kids from our group went off the stage to grab some teachers to do some jump jam. I didn’t know what was going on at the time. I had know idea that we were going to do jump jam.
It was the last day of Camp TC. I wished camp had gone on for a little bit longer. Our main activity for the day was Swimarama. It was lucky that we were going out to the pools because it was a very hot day. I really enjoyed camping on the school grounds. And hope that the yr 8 camp will be even better.
Posted by Room 21 PES at 10:34 AM 1 comment: